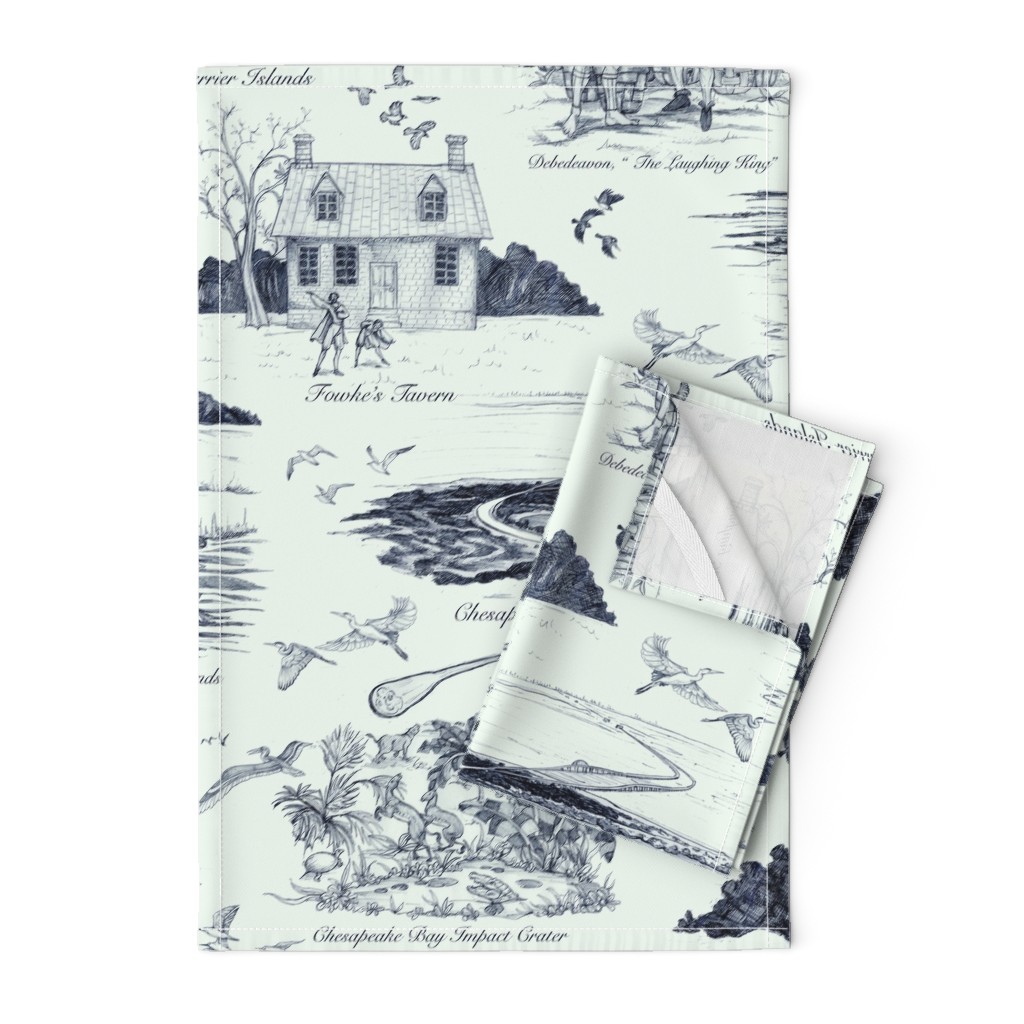 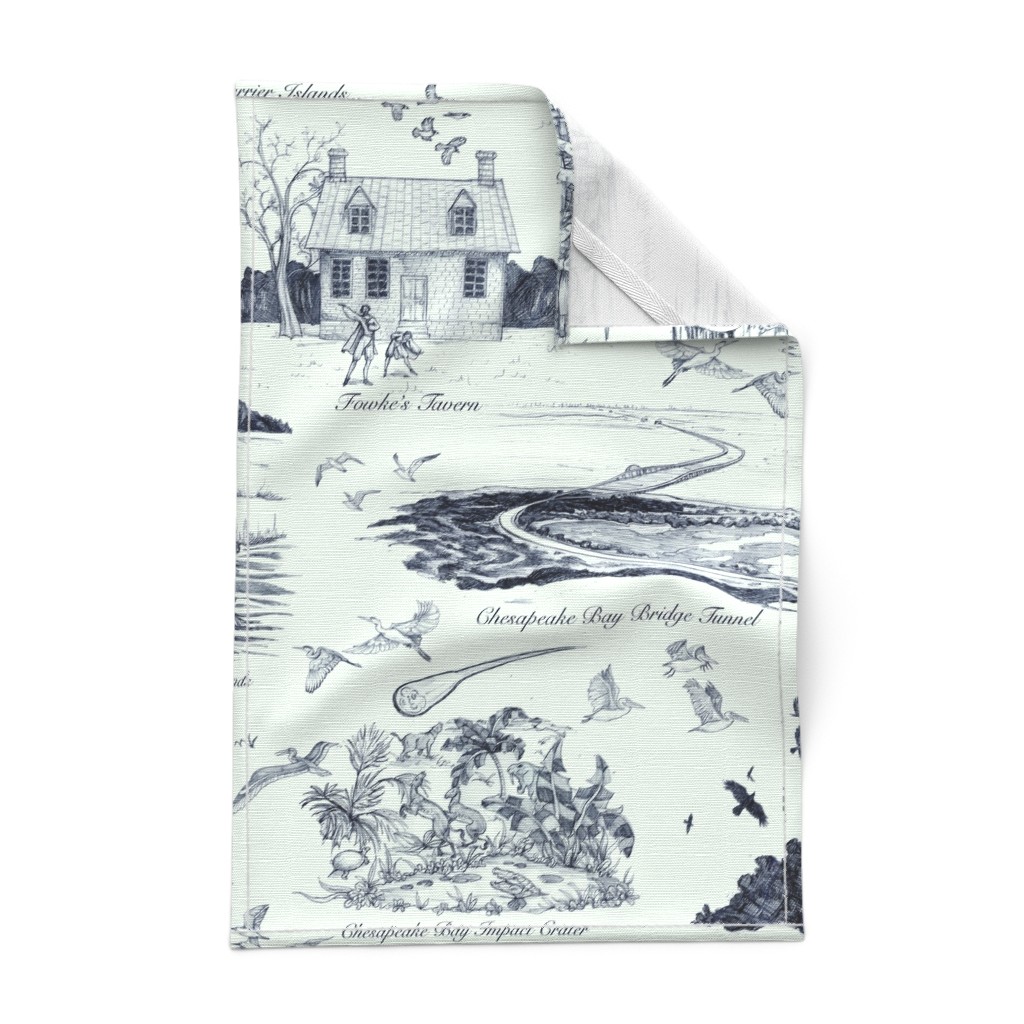 The perfect gift set for a friend or keep them for yourself, we won’t tell!

These tea towels are the workhorse of the kitchen. Whether you use them for lint-free dish drying or keeping hands dry, they'll bring a unique splash of color and personality to your kitchen. Each tea towel is designed by independent designers, from around the world, and printed and sewn in the USA.

These towels will soften and become more absorbent with use.

The Eastern Shore of Virginia is a narrow peninsula separated from the rest of the state by the Chesapeake Bay. It was a task and a half to narrow do

The Eastern Shore of Virginia is a narrow peninsula separated from the rest of the state by the Chesapeake Bay. It was a task and a half to narrow down my history choices to a toile's worth, but I have to say, this was the most fun I've had researching a fabric, ever! Here are the facts on the events and places I chose to depict, chronologically... Just off the coast of the charming Victorian beach community of Cape Charles lies the CHESAPEAKE BAY IMPACT CRATER. In the Eocene epoch a large bolide impacted the earth on the coast of North America, creating the basin that would one day hold the Chesapeake Bay. DEBEDEAVON, "THE LAUGHING KING", aka "Ye Emperor of Ye Easterne Shore and king of Ye great Nussawattocks", ruled the Nussawattocks tribe in the early 1600's. The Shore's first European settler, Thomas Savage was sent to him to be fostered by Powhatan ( you know, Pocahontas's dad). Debedeavon gave Savage a large track of land known today as Savage's Neck. EASTVILLE COURT RECORDS are the oldest continuous court records in the country, from 1632 until the present. FOWKES TAVERN in Accomac in the site of the first recorded English language play in the colonies, "Ye Bare and Ye Cubbe" in 1665. Yup. Birthplace of American Theatre here, people! TANGIER, an isolated island in the Chesapeake known by linguists the world over as still speaking a form of Elizabethan English! Have a listen here... ASSATEAGUE AND CHINCOTEAGUE ISLANDS, home to a herd of feral ponies brought to fame by Marguerite Henry's beloved children's classic, "Misty of Chincoteague" . Since before 1885, on Pony Penning each year the ponies are swum from Assateague to Chincoteague. There they are vaccinated and some are auctioned off to maintain an acceptable population. VIRGINIA'S BARRIER ISLANDS, a chain of 23 islands, most of which are uninhabited since the 40's and owned by the Nature Conservancy, these islands have protected the mainland from hurricanes and protected pirates such as Blackbeard from the law. NASA WALLOPS FLIGHT FACILITY, one of the oldest launch sites in the world, Wallops has launched over 14,000 rockets since it's first launch July 4, 1945. THE CHESAPEAKE BAY BRIDGE TUNNEL, 20 miles of bridge opened in 1965 and was declared one of the seven engineering wonders of the modern world. It's a spectacularly calming and beautiful drive, unless you happen to be on it at the same time as Tom Cruise...http://youtu.be/8l4qdf_1nGM The birds interspersed throughout represent the thousands of migrating birds we see each year as they stop for a rest before taking on the Chesapeake in their journey. Please forgive this long winded novel, I really love my home! 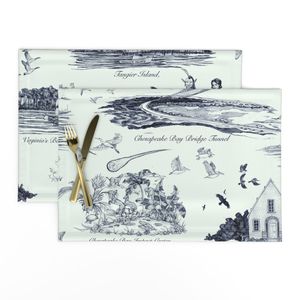 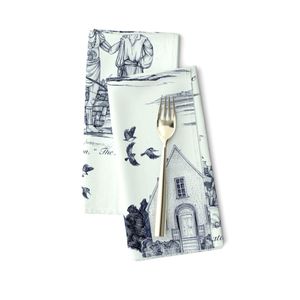 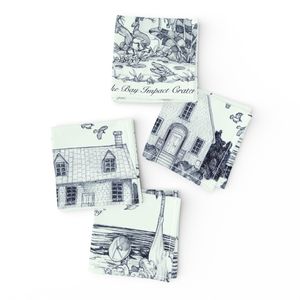 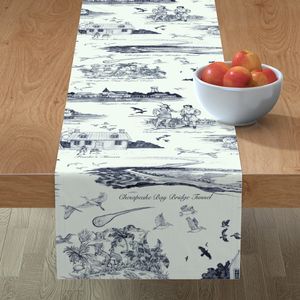 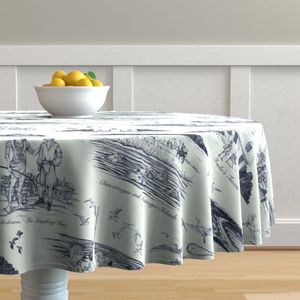 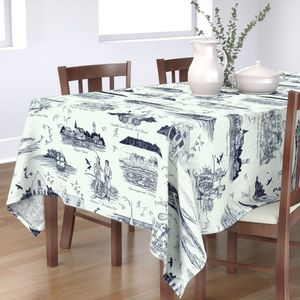 Rectangular Tablecloths
See all products in all categories